Here is an issue I have never quite figured out the answer to. Sometimes two or more companies want to book me for the same event or on occasion for two different trade shows which happen to share the same dates.

Even a magician can’t be in two places at the same time so I have to figure out the best way to handle the situation. If I turn down one company that means that I lose a potential client. All I can do is hope for the best that they may book me for a further event down the road but they probably won’t because the momentum is lost.

One seemingly obvious solution is for me to hire another magician as a back up. I have tried this in the past but it never works! Very few magicians have the ability to work trade shows and represent a company. They are pretty good at the magic but that is not the purpose of a trade show presenter. Many magicians think they are merely hired to entertain and they have fulfilled the job requirement at a trade show. Alas they haven’t and not by a long shot. The purpose of their presence is to draw crowds, hold them and most importantly act as a “living commercial”. In other words the objective is not so much to entertain but to SELL!  Or a better way to put it is to help the sales staff to SELL!  They do this by studying the company literature and consult with the marketing department to get an overview of the products and services offered.    They then need to work out a script which incorporates the magic into the presentation. They then need to liase with the company to get the script approved. Once that is done the hard work of memorising the script and rehearsing the presentation has to take place well before the show date.

None of this is easy to do and 90 percent of magicians have no idea how to do this and that is why many companies hire performers who advertise on the internet that they do trade shows but in actual fact have no idea of the correct way to go about things. They think they are just there to entertain but that is NOT the point of them being there.  And then, as one company recently remarked to me, the results are “somewhat ineffective”

So this is one reason why I no longer hire other magicians as a back up if I get double booked. Another problem I have encountered is that if another  magician is booked at another booth on the same show the company I am working for is not pleased there is another magician at the same show as it takes the shine off their own booth as understandably they want to stand out at the event and not have their effectiveness diluted by another presenter.

I have no answer to this conundrum. That is why companies who want to book me should get in first and not delay their decisions. It has to be first come, first served. Even a magician can’t split himself in two! So BOOK NOW WHILE YOU HAVE THE CHANCE! 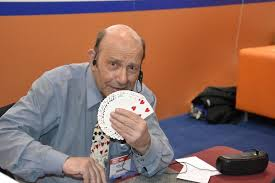 The Ontario Dental Association show is now over and I believe the company I was representing did very well. Lots of activity in the booth and of course the magic helped to break the ice with the attendees. After all a laughing attendee is an easier one to sell to. Here is a picture of a happy crowd watching my work:

Sorry I have been neglecting this blog recently but I have been performing at trade shows in Western Canada and have only just returned. I am now taking a rest until my next trade show which thankfully is in Toronto itself in a couple of weeks. Oops! My memory is going! I forgot I am doing one today!

Talking about Toronto here I am at the Print World Show which took place there. Not a particularly busy show traffic wise but I was able to draw consistent crowds anyway.

A good trade show magician should be able to draw crowds even when there is not much in the way of traffic. There are various tricks of the trade (no pun intended) whereby this can be done. One is to be so good that the people come back to see you again and again.

I am off to another trade show which starts this afternoon so I had better stop typing before I am late. Cheerio for now. 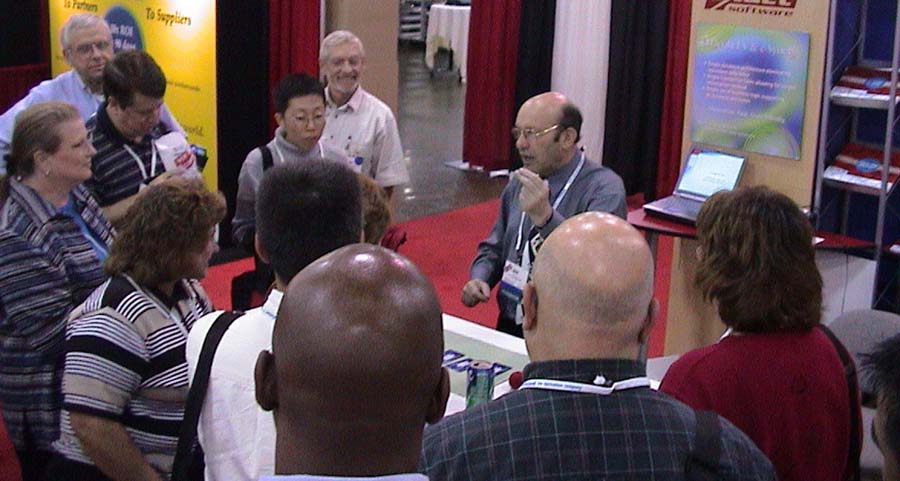 I find this a very useful book full of good information. The author had quite a decent career as a trade show magician from the late seventies right up to the mid nineties or so. He is now a Buddhist Lhama!

Chuck Stanford was highly influenced and learned a lot from Eddie Tullock who has already been discussed on this blog. The book covers such areas as why a company would want to hire a magician to trade show travel tips, how to work a show, what to charge, how to get bookings and other excellent info.

The book was originally published in 1989 and there was a very limited amount of information in the book as to how to get the trade show booking in the first place. However, that changed in 2006 when he republished the book with an extra chapter which described the very methods he used to get the trade show booking. It is based on telephone cold calling and it certainly worked for him. He emphasises that marketing and selling your services to potential clients is a full time job and in fact takes up more time than working the show itself!

The book is very readable and I consider it one of the better manuscripts on this subject.

This is a pretty old book on Trade Show Magic and in fact is one of the first I ever read. It was written by Bud Dietrich and Dick Jarrow.  Dietrich was a leading trade show magician with a sterling reputation. Mind you,  I still remember one thing that I heard which I always remembered about him. He did many shows for Hoyle Playing Cards which were manufactured by Stancraft.  In fact he was known as “Mr Hoyle” and he was certainly one of the most important trade show magicians around at that time. Now,  in the seventies I also did trade show work for Hoyle when the product line was first introduced to Canada.

Naturally I asked about Bud Dietrich and one rep complained, “Bud was great but there was only one problem. We couldn’t get him to stop because he was such a ham!. The salesmen couldn’t get a word in edgeways!”  I have always remembered that remark in my own work and make sure I don’t get in the way myself! After all the main purpose of a trade show magician is not so much the entertainment but to assist the sales people by gathering a crowd and conveying the features and benefits of the product to the attendees in an entertaining manner.

Having said this Bud Dietrich must have done something right since he was always busy and was one of the highest paid performers in this particular field.

But back to the book. Alas I don’t know much if anything about the other author Dick Jarrow so regrettably I can’t tell you much about him.

I was never able to get much out of the book when it first came out as the concept of performing magic at a trade show was not familiar to me and the book was written as if I should know all about it already. However, much later on the book made more sense to me and as a result became more useful. It talks about microphones, sales meetings and hospitality rooms and other kindred subjects. I think one feature of the book which no other book of this kind possesses is that it actually has a few chapters for the exhibitor who books the magician rather than for the performer himself.

As usual the book tells you nothing about how to book the show in the first place.

Overall, a book that deserves to be in the library of every trade show magician.

This is quite a readable little volume and it does give a fair bit of information on how to get the trade show booking in the first place along with information on how to best work the show. Hints and tips on business cards, photographs, letters of reference, press clippings and videos showing the work of the magician.

It has a Q and A section. Here are the questions. You will have to obtain the book to find the answers!

1. What is the number one secret of trade show work?

2. As a magician what is the greatest skill I need to develop?

4.What is the negative part of trade work?

5.How Much Money Can I Make?

6.If you are looking for new corporate markets, where do you look?

7. If you could use only one marketing tool, what would it be?

8. What has been your biggest obstacle?

10. What magic tricks do you recommend?

This particular book gives good advice on trick selection, how to incorporate company messages into magic presentations and other general advice for a magician who wants to work trade shows. However the most valuable component of this book is that unlike other books of this kind this one concentrates on how the performer gets the booking in the first place.

The author describes a system he uses combining direct mail and cold calling. He tells you how to get the names to build a mailing list and mentions sources galore where you can find contacts to help you in your search for a trade show booking.

I would say that more than half the book is taken up by advice on marketing your services as a magician and that can only be a good thing. I would recommend the book for that alone. To be frank I personally don’t use most of what is described to market my services but that doesn’t negate the usefulness of the techniques to others.